The common ground between USL-5UE and Millenium Development Goals (MDGs)

Lately, I realized that it turned out there are a lot of common goals between USL-5UEs’s and MDG’s.

Although there are a lot in common between the UN operations and USL, USL focuses on issues that are not geopolitical and doesn´t involve anything military or forces. The most obvious common grounds are the MDGs –> Post-2015 & SE4All and the UNEP, UNDP, UNDESA, UNIDO, and UNESCO may be some of the UN agencies or groups that have the most in common. 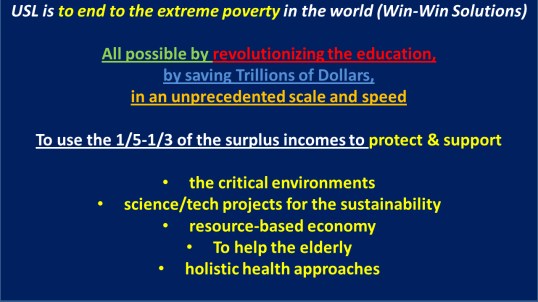 To bring the revolutionary benefits to our world

Although UGG may expand itself to cover all of MDG and beyond, at the current stage, the main aims of UGG is the first three of the MDG goals, followed by the 7th. So, half of the MDGs. The health parts of MDGs are beyond our current scope obviously, but will be covered later.

The basic plans are:

If we manage to collaborate with UN, especially UNESCO, etc, early enough, then we may be able to take even more ambitious projects.

A Short Visual Guide to the USL 1 & 2 with the economic contributions for URF to work with the UN (2.5 minutes)

This video may appear to run a bit fast to read everything. So please feel free to pause in between to read all the written words or view it twice to digest the materials if necessary.